Gus’ Story: Our Search For Answers 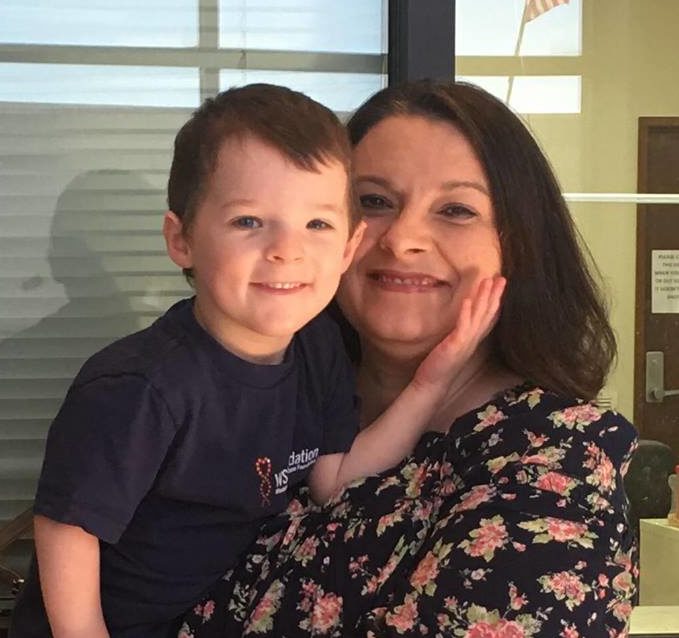 Gus was diagnosed with Wiedemann-Steiner syndrome in July 2017, just shy of his 3rd birthday. Here is our story…

“Please don’t shoot the messenger, but…can we talk?” I will never forget this day. Gus was 8 months old, and I had just arrived to pick him up at his sitter’s house. Prior to this day, I had only thought that Gus was just a little slower to develop than his older brother. (My older son had just turned 4 and was already beginning to read. Everything comes easily to big brother and he had done everything early–walking, talking, etc–but my husband and I had worked very hard to not compare the two of them.) The sitter began to explain to me how her friend stopped by that day for a visit. All the children were napping, except for baby Gus (he never liked to nap!). She told me that her friend was a nurse who works for the state department of health, and that she had noticed something peculiar about Gus. While playing with him on the carpet, she observed that he had a head lag, which could indicate an issue with his muscle tone. The sitter told me that her friend had went back to her car and retrieved a flyer for me. This flyer had information on the state’s Early Intervention system and a phone number to call for a referral. I was shocked. I didn’t know what to say. I didn’t know what to do. No one in my extended family had ever needed Early Intervention! I went home, cried for a while, then stayed up all night googling. My husband and I decided that we weren’t going to call that number until after we talked to our pediatrician.

A week after that conversation with the sitter, one of my best friends lost her daughter in a horrible accident. A few days after the funeral, another best friend gave birth to a healthy baby boy. I was a teacher, busy with all the events and paperwork that come with the end of a school year, we were grieving, we were in the middle of a total kitchen remodel, my life was total chaos. I chose to ignore everything I had googled and all the warning signs. That flyer sat on the desk in my classroom for another month.

When I eventually got Gus to the doctor for his 9-month-old checkup, I planned on discussing it all with his doctor. When we arrived, however, we were met with the “ages and stages” questionnaire. The nurse told me that it was standard practice and that it is one of the early screeners they use for autism. I looked it over and saw that the scoring sheet was still attached to the back. Being a math teacher who loves data, I decided I would calculate his score myself as I filled out the form. By the time the doctor walked in, I was in tears. “He failed, and failed badly,” I told her. After looking over my answers and hearing the story of my conversation with the sitter, the doctor agreed that there might be a problem. She told me that she was going to refer him for an Early Intervention evaluation. She said I should expect a phone call.

A couple weeks later, our local Early Intervention provider sent a physical therapist to our home to evaluate him. She had been down on the floor playing with him for about 60 seconds when she said “Ok, I can already tell you, he has hypotonia. That means he has low muscle tone, and his muscles don’t respond to stimulation the way typical muscles do. I think he IS eventually going to crawl and walk, but it’s going to be slow process.” Once again, I was speechless and spent all night googling.

As the summer went on and we approached his 1st birthday, his therapists continued to nudge me towards seeking answers as to WHY he was delayed. His pediatrician eventually ordered an MRI to rule out any issues with his brain (could it be cerebral palsy?), but that came back normal. Gus crawled for the first time at 12 months, and walked at 17 months. His therapists were delighted by his progress and felt that he was responding very well to therapy–he caught on fast!

Around the time he started walking, we were referred to the genetics team. (The physical therapist was adamant that there was a genetic explanation for his developmental delays, and the pediatrician agreed.) That genetics appointment was a tough one. It’s hard to avoid getting your feelings hurt when a team of doctors are peppering you with questions, examining your child, and pointing out all the things that are “wrong” with him: hypotonia, hyper-mobility, wide nasal bridge, wide set eyes, epicanthic folds of the eyes, diastasis recti, tongue tie, lip tie, head shaped strangely in the back, pinky fingers slightly curved, spoon shaped toenails, hairy back, chronic cough, light sensitivity, high pain tolerance, loves water, happy personality. I had already done enough research to be terrified by some of the seemingly innocent questions they asked. That day, the doctor ordered some bloodwork. He wanted to test Gus for Fragile X and also do a Microarray test which would check each of his chromosomes.

Two or three weeks later, the doctor called me to say that his results came back normal. The syndromes the doctor had suspected were negative. “What about Mosaic Down Syndrome”, I asked. (I was CONVINCED Gus had this rare form of Down Syndrome, or that he had some sort of Mosaicism.) The doctor assured me that the test would’ve caught it if he had it. He told me that everything was going to be ok, and that “some kids are just slow to develop.”

Eventually we saw a Developmental Pediatrician who told us about a multi-million dollar research study that was ongoing in our state and urged us to reconnect with the geneticist. More late night googling ensued, but I decided that Gus would NEVER be accepted into the study. Sure, everyone agreed he was delayed. But he wasn’t THAT delayed. Why would they want to spend their resources on him? The study was funded with federal dollars and was seeking to use “whole genome sequencing” to find answers for children who had unexplained developmental delays. That testing often costs about a bazillion dollars, although the price drops exponentially each year. Insurance doesn’t cover it, so we decided to carry on with life and try to ignore those gut-wrenching feelings that something was “wrong” with our son.

I decided to quit my job to focus more attention on my family and managing all the therapy appointments. My older son started kindergarten, Gus turned 2, three or four more months went by, and then the holidays came. It was then that we got to spend alot of time with Gus’s younger cousins. The twins are exactly a year younger than him, and seeing the differences in development and behavior in Gus and those babies was startling and upsetting to me. He was having major sensory issues at that time (I’ll spare you the details), and I knew that the sensory-seeking behavior was yet another piece of the puzzle for him. I felt as though I was googling myself off the edge of a cliff by the time the holidays were over, so I called and made another appointment with the genetics department.

I went to that appointment prepared to BEG to be enrolled in the study. I was going to DEMAND that he tell me how much the test would cost us out of pocket. We were DESPERATE for answers. Thankfully, I didn’t have to do either of those things. When the doctor walked in the room, he immediately saw Gus licking the trash can (!), he saw him running in circles in that tiny exam room, he saw him ripping the paper covering the exam table into tiny little shards, and he saw him hit his father in the face when he tried to make him sit down. The doctor actually suggested the study to us without me ever having to admit that I already knew about it!

A month later, we traveled two hours away to the clinic that would take our blood and go over the consent forms with us. They cautioned us that the results would take months to come in, that they were only finding answers in about 25% of the children, and that no matter the outcome we would have to travel back there to receive our results in person.

Five months later, things were going great! Most of the sensory issues had dramatically improved, Gus’s speech was greatly improved, and his Early Intervention therapists had actually discharged him because he was no longer delayed enough to receive their services! We received the call that the results were in and scheduled a time to travel back to the clinic. My husband and I laughed that day that the doctors/researchers would probably yell at us for wasting their time when they saw how much progress Gus had made over the past 5 months. In our opinion, he was now a typical 2-year-old, albeit a spirited one!

The team walked in that conference room, and one of them was actually OUR geneticist that we had originally seen when Gus was a year old. He said “Tell me again why we are all here?” I laughed and said “Well, we wanted answers….but he’s doing so well that I’m sure there isn’t any explanation.” The doctor said “Well, in Gus’s case we actually DID find an answer. He has a named syndrome. It is extremely rare. It is called Wiedemann-Steiner syndrome.” At that moment, the world stopped and everything went blank. I don’t remember what all was said after that, but I do know that one of the genetic counselors handed me some paperwork and a sticky note that had the name of a Facebook group on it. I do remember asking if Gus was going to die, and asking if his condition was going to get worse over time, and I remember feeling relieved by all of their answers. We drove the two hours home in shocked silence while I feverishly googled and requested to join the Facebook group for parents of children with WSS.

Now, months later, we have come to accept Gus’s diagnosis and are very optimistic about his future. While we are saddened that he has these challenges, we know that it could’ve been so much worse. We feel very blessed that Facebook has allowed us to connect with the other WSS families, and even more blessed that we were recently able to travel out of state to meet with several of the families. We are hopeful that more researchers will begin to study this rare syndrome and that the increased availability of genetic testing will lead us to learn that Wiedemann-Steiner syndrome isn’t quite so rare after-all!