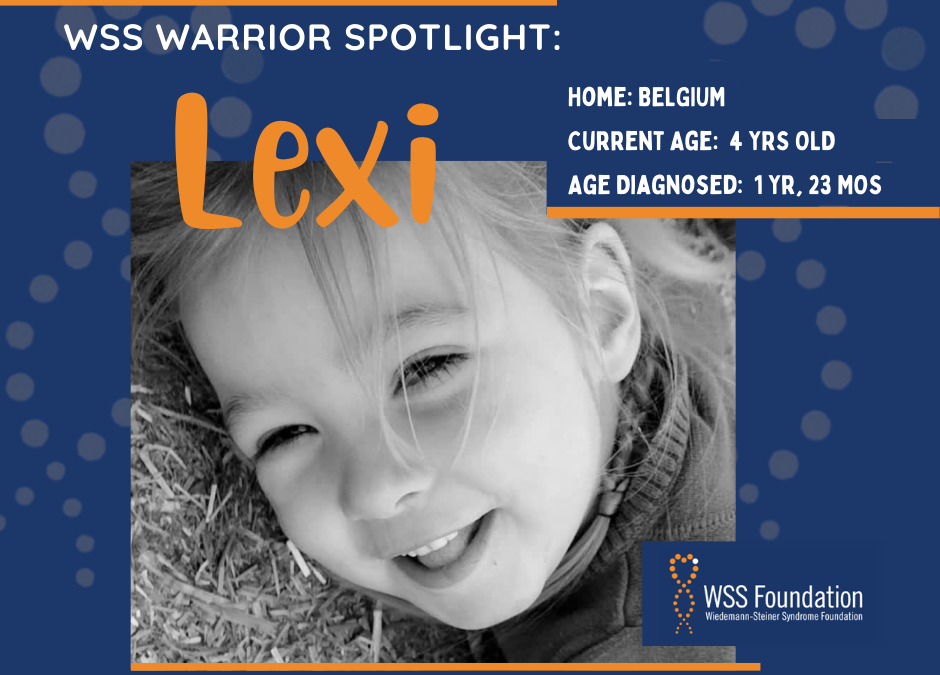 Her mother, Tinne, shares her journey from the early signs at birth and through their discovery of two diagnoses that explain her symptoms and characteristics. At four years old, Lexi embodies the strength, persistence, and love of a WSS warrior.

Early Signs
Lexi was born in March 2018 after a normal pregnancy. The only strange thing during pregnancy was that she was in the same position for the whole pregnancy, hardly moving. I did not see any hands or feet bumps or feel her move.

At birth, she was like a very tiny ragdoll. Although not extremely small at birth, she was petite. She had to stay in the NICU because she was not able to maintain her body heat and blood sugars properly as well as lacking the strength to drink. She was tube-fed for two weeks, and then she got the hang of eating on her own.

After a few weeks in and out of the pediatrician’s office, she had appointments with a genetics doctor and a specialist in child neurology. They performed their tests, and Lexi received the diagnosis of Wiedemann-Steiner Syndrome (WSS) six months later. She was a month from her second birthday.

In that moment, everything fell into place…the low muscle tone…the failure to thrive…the delayed walking…her outbursts…

Living with WSS
After the diagnosis, we started going to different specialists. For her low muscle tone and since she was 6 months old, she gets physical therapy twice a week, including one session at home once a month. Gaining weight was difficult, and still is. She eats well but always the same things. Due to her low muscle tone, she eats soft things. Her favorite meal is lasagna and chocolate-spread sandwiches.

She goes to normal school and for now, she is doing well. She is quiet when spoken to, but very active when she is with friends. Since her second operation – where her adenoids were removed – she is able to speak a lot better. We could finally hear what she was saying.

At home, she is a handful. She has a feisty character: she wants things her way and will continue until she succeeds. She is repetitive in her sayings and has difficulties understanding the word “no” or what “danger(ous)” means.

Discovering Autism
It was before her second birthday that I started to realize Lexi could be on the autism spectrum. I began advocating for her to be investigated, and we have a wonderful pediatrician who referred us to a specialized center for neurodevelopment disorders. After testing Lexi, they stated she has symptoms that could be registered as autism, but she was too young to be given a final diagnosis. They wanted to see her again in 18 months, near her fourth birthday.

During this time, I became more and more convinced that she has autism. From my observations, she displays many symptoms, including:

I can go on and on and on. After her the second testing, we finally received confirmation (in April 2022) for what I suspected over the past wo years – Lexi has autism spectrum disorder (ASD).

I was relieved and scared at the same time. I already read that there is a significant connection between WSS and ASD. Still – every parent wants the best for her or his child, and as her parents, we are scared for her future: what will become of her? Will she be able to live successfully without us? Will she be able to live alone? To go to school? Learn a profession? Will people take advantage of her? We’re processing all these feelings with the recent diagnosis.

Strength of a Warrior
Lexi just turned 4 years old. She continues to see a many doctors and specialists, and it amazes me on how well she goes through all the examinations. She is my strength in life, my love, my great example on how to be kind and loving. She is showing me how to never give up on things. She keeps me on my feet and amazes me every single day.

I hope she grows up to be a strong warrior, a strong woman, and that she is happy and loved the way her dad and I love her now.