This data was compiled in October 2017 based on 67 respondents.

The CoRDS Registry is the WSS Foundation’s official method of tracking international statistics related to Wiedemann Steiner Syndrome. CoRDS is the Coordination for Rare Diseases at Sanford. (For more information click here.)  Every family with a child affected by WSS (and affected adults) is strongly encouraged to participate in the CoRDS registry.  All information is de-identified and no personal information is shared with the public or the WSS foundation.  This registry is crucial to collecting data and promoting research to better understand WSS, needed treatments/supports, and future directions.   The information gathered will be updated biannually by CoRDS and shared with the WSS foundation for publication on this website. As needs present, new questions will be added and therefore families are encouraged to revisit the registry yearly to update information. Below are graphs detailing some of the basic information gathered in the registry. As more participants enroll, the reliability of specific information will improve.  Again, absolutely NO personal information is shared publicly or with the WSS Foundation.

WSS was genetically discovered in 2012 by Dr. Wendy Jones using whole genome and whole exome sequencing. Although the majority of reported WSS cases worldwide are pediatric, it is assumed that there are equal numbers of unreported (and possibly misdiagnosed) adult cases.  At this time, the majority of newly diagnosed cases of WSS are of children under 10 years old. It is common for parents to simply give up after years of expensive testing that yielded inconclusive or no results.

At this time, the reported cases of WSS tend toward male. However, there does not appear to be a genetic explanation for this and may not be entirely accurate outside of this data pool. Our hope is that as more families participate in the registry, the numbers will be solid and accurate.

It is believed that the incidence of WSS does not follow a racial or ethnic profile. At this time Whole Genome/ Exome Sequencing is offered in the United States and Europe at higher rates than in other areas of the globe, thus accounting for the preponderance of “White” respondents. The foundation is aware of a number of studies of WSS children in China, yet no data has been collected from this population for this registry. Again, as the number of cases increase, the overall understanding of WSS will improve. 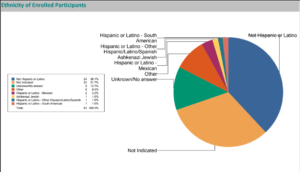 These figures have changed significantly since this data was gathered in October of 2017.  Since this information was published, there have been significantly more reported cases in both the United States and Europe.

It has been noted that clusters of diagnosed cases have been located in areas close to large research hospitals offering genetics services and consultation.  This may account for the increase in cases in the United States, United Kingdom, and Canada given that these three countries offer extensive genetics testing at research institutions. As whole genome/exome sequencing becomes more affordable and accessible in all countries, it is believed that the data will reflect the actual geographic distribution once more families complete the registry. 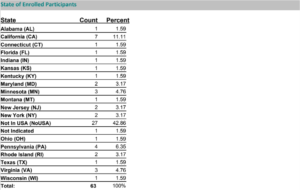 How and when is WSS diagnosed?

As stated in the graphs above and this graph below, most cases referenced in this data represent children under age 10.  It is estimated, however, that as more data is collected, a truer picture will be illustrated with regard to this population’s age. There is no evidence to suggest a difference in lifespan from the typically developing population. Rather, it appears fewer parents choose genetics testing once their child passes age 10.

The only way to definitively diagnose Wiedemann Steiner Syndrome is through genetic testing, specifically whole exome or whole genome sequencing. Some patients hold a clinical diagnosis of WSS based on observation of distinctive features and other tests.  The foundation’s hope is that whole genome/exome sequencing can be made available to all patients who would benefit from it. Once a diagnosis is given, a family can begin the appropriate interventions and support services.

If you have any questions about this registry, the WSS Foundation or about the CoRDS program, please contact the WSSFoundation.