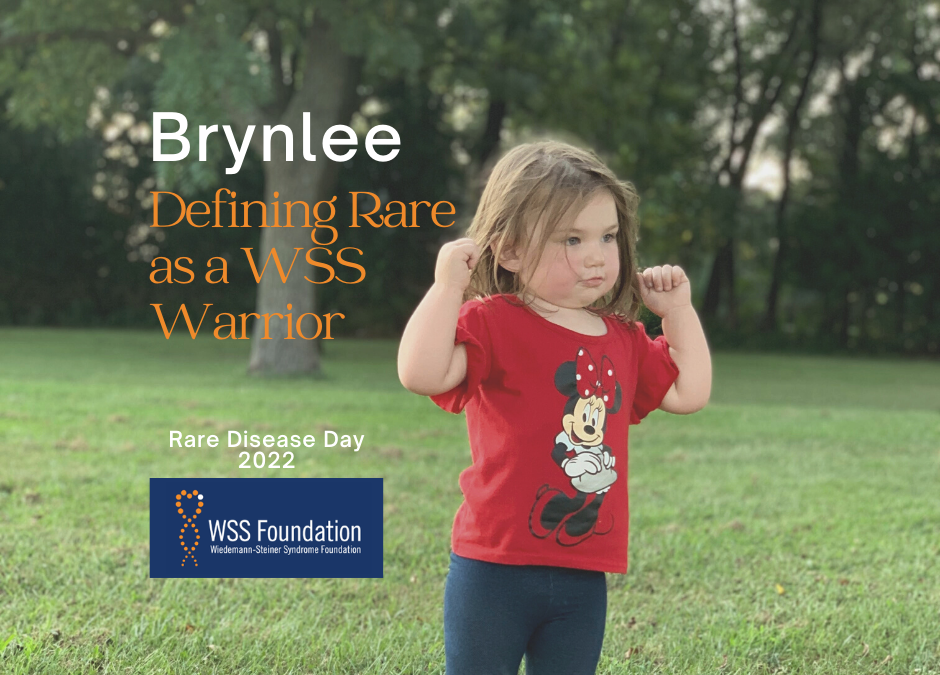 In celebration of Rare Disease Day on February 28, 2022, the WSS Foundation led a storytelling experience featuring individuals with WSS and their parents. This story comes from Susan Thompson in USA as she explores what it means to be “rare.”

When I used to think of the word “rare,” I would think of things that were “unheard of” or “one in a million.” And something that is considered a favorite…what everyone wanted, but couldn’t have.

I never quite associated “rare” as being the word that would be used the most to describe a person…or my child, in particular…or her pain tolerance…or her resilience…or her health…or her smile…all of it.

Rare is now a word that has vacated its expected usages in any dictionary.  It has its own language in our household. Rare now describes every aspect of life for us. The hardships, feelings, pains, emotional turmoil with each new diagnosis, celebrations, milestones.. All of it, rare.

Brynlee was born at 39 weeks after a very complicated pregnancy. As high risk as I became, she managed to stay completely stable. She was a fighter from the very beginning. She was born with Hydronephrosis in her right kidney that has since resolved but would prove to be the first roadblock of a “normal” life for her.

She made it 2 days before she was having her first of many ultrasounds on her kidneys. At 2 weeks old, her first double virus hit. Followed by chronic recurrent ear infections that took part of her hearing, MRSA that was left untreated for months because it presented as a diaper rash. She began having seizures, and seizure-like activity at 4 months old. Got her first nebulizer treatment around 8 months and brought a nebulizer home because she has low oxygen while sick. She had her first surgery at 10 months old for tubes. By a year old, Brynlee had been on many antibiotics and medications. None of them have ever worked for her.

Still, she smiled through it all.

She was growing, learning, and meeting her milestones. So while I was still set on my gut feeling something was wrong, she was healthy. I got so many “new mom worry” comments that I began questioning whether her health problems were real… Or if I really was just worrying.

I continued to question it until….

…I had to all but scream at a doctor to listen to me, for the doctor to watch Brynlee walk. I walked my daughter out into the hallway and had her chase me. She made a couple of laps, then fell. She couldn’t walk anymore. Brynlee cried hysterically while they checked her legs. For the first time, I was HEARD.

I wouldn’t find out for several more months…but I was right, something was wrong.

She was walking on bilateral tibial torsions secondary to untreated Clubfoot. Easy enough to do night braces to help correct it.

Except, NOTHING was easy about her life following that day.

She began to swell profusely at night. She got stuck in her braces and we had to pry them off her. Her pain tolerance allowed her to sleep until she was so swollen the braces began cutting into her legs.

Soon after, daily fevers of over 101 would begin too. She stopped eating. Stopped talking. Stopped walking, like she used to. She stopped being that bright-eyed girl that I always saw in the mornings. She had troubled sleeping. She’d go into a daze and just stare through you as if you weren’t even standing there. She’d come out of it and hallucinate that her dad was standing in front of her. She’d hug the air and talk to him, but he was at work.

She’d fall over and be asleep when I’d walk over to pick her up off of the floor. She got aggressive after these incidents, which are prime aftereffects of seizures. I took video after video to take to EVERY doctor I could think of. Neurology witnessed an episode in clinic and believed them to be seizures. EEG proved they weren’t. We still don’t know what they are. Rheumatology did a major work up, as did Gastroenterology. She went through her first Colonoscopy and endoscopy just after her 2nd birthday.

They couldn’t find any reason for her health to be the way it was. She saw every department, it felt like, and nothing was coming up.

We were feeling defeated.

Until her Rheumatologist mentioned genetic testing for autoimmune issues. Her results came back…pathogenic for Wiedemann-Steiner Syndrome.

We FINALLY won. We found the cause.

Except, no, we didn’t. We’re still fighting as she’s begun having rapid changes in other aspects of her health that aren’t in line with her diagnosis.

Being one of the parents who has struggled immensely with the changes that each day brings, I have heavily relied on these parents who also share these struggles.

Everyone is beautiful. But, the true beauty lies in the hearts of the rarest people.

The WSS warriors who make living with health hardships look easy. The child who longs to be “normal” but doesn’t realize the most beautiful thing about them is that they aren’t.

The parent who tucks their babies into bed and cries because being a WSS warrior mom or dad isn’t as easy as it looks.

Rare, has a new meaning to us. Rare is now the most beautiful and unexpected part of life. Rare is seeing doctors more than family, having tests done every visit, and STILL wanting to be a doctor for Halloween.

But, if you ask any of us parents…this is our life. This is the lives of our children… We wouldn’t change a thing about it because while we long for simplicity, we couldn’t imagine life any other way. We couldn’t imagine our days being less chaotic. We couldn’t picture our children as being anything other than who they are. And that’s okay because we don’t have to. We have realized that Rare IS Beautiful in every sense of the word.

Happy Rare Disease month, and to all Rare Disease Warriors! Our family wishes you the happiest Rare Disease Day this year. Celebrate you, and all the rarities of yourself!