Allison’s Letter to the WSS Community 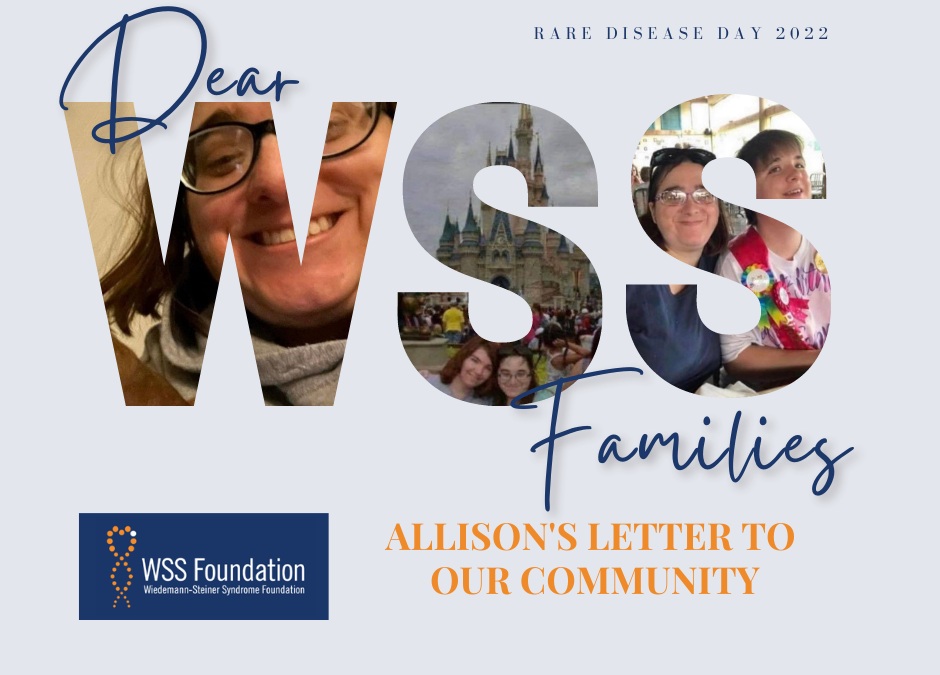 In celebration of Rare Disease Day on February 28, 2022, the WSS Foundation led a storytelling experience featuring individuals with WSS and their parents. This story comes from Allison Barnes in the USA and in the form of a letter featuring her thoughts on her WSS journey, including all the friends she’s made along the way.

I was diagnosed at 27 years old, after having some health challenges by a geneticist at Nationwide Children’s Hospital in Columbus, Ohio (USA). After taking my blood and examining me quite a bit, he was convinced that I had Wiedemann-Steiner Syndrome!!!

I remember him telling my parents that he had never see a WSS adult in his life. He even pulled out a medical book and said, “pretty cool, if you ask me!”

I’ve been a medical mystery for years. At four years old, I was seen at University of Michigan where they told my parents that I had a syndrome, but they didn’t have it named yet.

With my diagnosis, I finally had the answers that I was looking for my whole life!! And I could finally pinpoint why I was different from my peers.

I graduated high school with a vocational diploma, and then worked for a few years until I constantly began to pass out. As a result, I was given another diagnosis of Dysautonomia, the most common form of Neurocardiogenic Syncope along with food allergies.

But none of that has stopped me from being the best “me” that I can be and to advocate for other WSS families!!

I attended my first WSS gathering in Baltimore, Maryland. I was the only WSS adult there. Over time, I have connected with more adults affected by WSS (mainly females seem to be more prevalent!) – Izzy, Becky, Monica, Sarah, Jenné, and Lara!!

My favorite WSS event was in 2017 in Orlando. Lara and I along with a couple of other families went to Disney World’s Magic Kingdom Park. It was exciting!!

I am forever grateful for my WSS worldwide families!!!